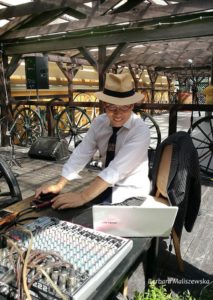 Odysseus Dada, one of the most sought-after International Tango DJs in the world, is an experienced DJ based in Korea and for the last 15 years he’s been invited to many international tango festivals, and marathon and championship events around Asia, Europe, America and now in Oceania, New Zealand. He loves the traditional tango music from 1935 to 1950s with the likes of Canaro, D’arienzo, Biagi, Rodriguez, Tanturi, Fresedo, Di Sarli, Calo, Lomuto, Troilo, Pugliese, Laurenz, Salamanca and Varela.

He is a resident DJ of the largest Milonga in Seoul, Milonga del Corazon, director of the Argentine Tango Association of Korea and organiser of the Korea International Tango Championship.

Outside tango, Odysseus is also active in different fields of poetry, films, broadcasting and is a professor at the university of Image Creation Korea. He is one of the famous film critics in Korea, a broadcast facilitator and has directed a film called “Red Tango in Korea”.